← more from
New Amsterdam Records
Get fresh music recommendations delivered to your inbox every Friday.
We've updated our Terms of Use. You can review the changes here.

by Roomful of Teeth 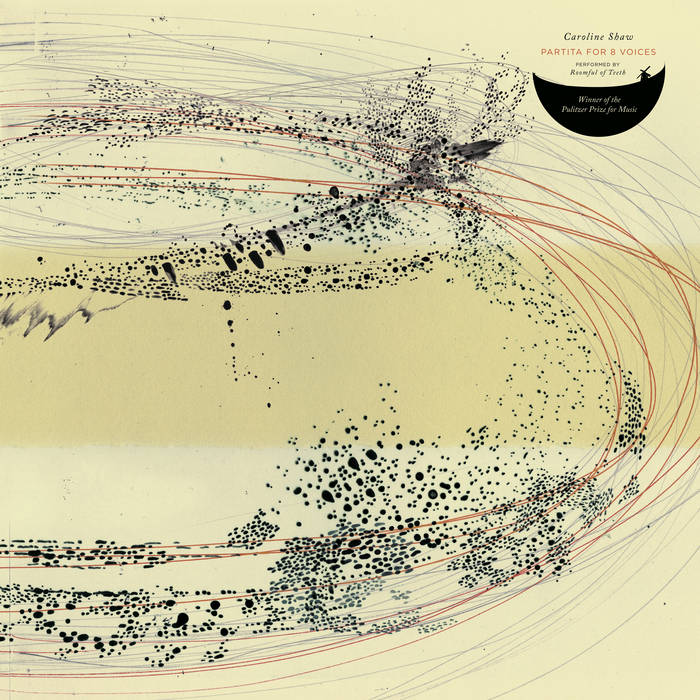 Colin Every time I listen to this, I just cannot believe how good it is. Favorite track: Partita for 8 Voices Part 1: Allemande.

saidanddone This is joy in its most primal form. Let the music make you come alive! Favorite track: Partita for 8 Voices Part 3: Courante.

Engelram A whiplash on your bored and jaded life...!! What a chill through the spine when I first listened to this monumental release.
more...

the lemon of pink

New Amsterdam Records is proud to announce the first-ever vinyl edition of Caroline Shaw's seminal Partita for 8 Voices, performed by Roomful of Teeth. The album (pressed at 45 RPM and featuring artwork by DM Stith) will be released on November 18, alongside a digital-only EP of remixes created by Olga Bell, Lorna Dune, No Lands, Morgan Packard, Aaron Roche, and Violetness (the remix EP can be found in the "Discography" column to the right).

Composed over three summers from 2009-2011, in collaboration with Roomful of Teeth during their residencies at the Massachusetts Museum of Contemporary Art (MASS MoCA), Caroline Shaw’s Partita for 8 Voices received the 2013 Pulitzer Prize in Music, and was nominated for a Grammy for Best Contemporary Classical Composition. It is the only Pulitzer awarded to an a cappella vocal work, and Shaw, a singer in the ensemble, is the youngest composer ever to receive the prize.

The score’s inscription reads: Partita is a simple piece. Born of a love of surface and structure, of the human voice, of dancing and tired ligaments, of music, and of our basic desire to draw a line from one point to another.

Each movement takes a cue from the traditional baroque suite in initial meter and tone, but the familiar historic framework is soon stretched and broken through “speech, whispers, sighs, murmurs, wordless melodies and novel vocal effects” (Pulitzer jury citation). Roomful of Teeth’s utterly unique approach to singing and vocal timbre originally helped to inspire and shape the work during its creation, and the ensemble continues to refine and reconsider the colors and small details with every performance.

Allemande opens with the organized chaos of square dance calls overlapping with technical wall drawing directions of the artist Sol LeWitt, suddenly congealing into a bright, angular tune that never keeps its feet on the ground for very long. There are allusions to the movement’s intended simulation of motion and of space in the short phrases of text throughout, which are sometimes sung and sometimes embedded as spoken texture. Sarabande’s quiet restraint in the beginning is punctured in the middle by an ecstatic, belted melody that resolves quietly at the end, followed soon after by the Inuit-inspired hocketed breaths of Courante. A wordless quotation of the American folk hymn“Shining Shore” appears at first as a musical non-sequitur but later recombines with the rhythmic breaths as this longest movement is propelled to its final gasp. Passacaglia is a set of variations on a repeated chord progression, first experimenting simply with vowel timbre, then expanding into a fuller texture with the return of the Sol LeWitt text.

Of the premiere of Shaw’s Partita, New York magazine wrote: “She has discovered a lode of the rarest commodity in contemporary music: joy.” And it is with joy that this piece is meant to be received in years to come.

Roomful of Teeth is a vocal band dedicated to re-imagining singing in the 21st century.

Bandcamp Daily  your guide to the world of Bandcamp

Frayle's Gwyn Strang and Sean Bilovecky join the show to talk about their cathartic new album.